Like most websites we uses cookies. In order to deliver a personalised, responsive service and to improve the site, we remember and store information about how you use it. This is done using simple text files called cookies which sit on your computer. These cookies are completely safe and secure and will never contain any sensitive information. They are used only by us. The information you provide will be used solely for dealing with you for your activities at Queen Mary Sailing Club. The club has a data privacy policy which can be found at https://queenmary.bookinglive.com/the-club/club-documents your data will be stored and used in accordance with this policy'.

How to Find Us

Situated just to the west of London on the Surrey Middlesex borders we are conveniently located for major motorways, trains and buses. Listed below are various means of finding us here at the Queen Mary Sailing Club. 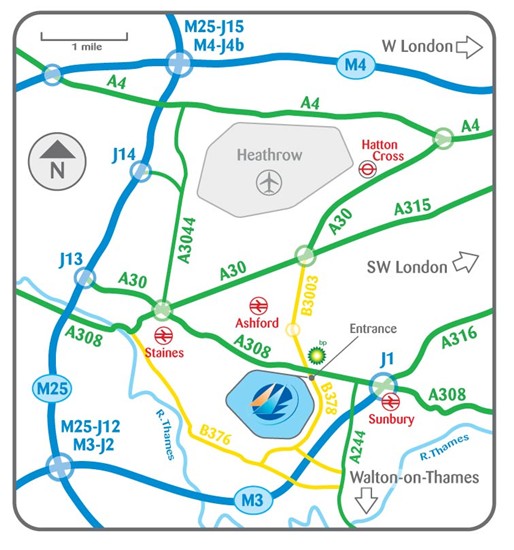 The reservoir is 1 mile West of Junction 1 of the M3. Set your GPS to our postal code TW15 1UA.

As your sat nav approaches the reservoir, please make sure that at the traffic lights with the BP Service Station that you turn into Ashford Road (B378) from the A308 and immediately turn into our entrance. The satnav will take you to a point on the A308 which is opposite the Clubhouse but about half a mile from the actual entrance

From the South or West

Take the M25 to M3, turn up the M3 into London. Take the first exit (Junction) and turn left down the A308 signposted Staines. After 1 mile turn left (large brown signs for Queen Mary Sailing Club) opposite the BP petrol station. After 50 metres turn right into the club.

Take M25 to J13. Turn left (A30 towards London). At first junction (Crooked Billet) take left lane to turn right (signposted A308 Kingston). Go straight on at next roundabout and turn right at first set of traffic lights. After 50 metres turn right into the club.

Take A4 to roundabout after Hammersmith flyover then head left on the A316. Turn off at Sunbury Cross Roundabout (Junction 1). Follow the slip road and at the roundabout take the 5th exit (signposted A308 Staines). After 1 mile turn left (large brown signs for Queen Mary Sailing Club) opposite the BP petrol station. After 50 metres turn right into the club.

British Rail Stations at Sunbury and Staines (from Waterloo), are both about 1 1/2 miles from the club. From Sunbury Station take the underpass to outside the Sunbury Cross Shopping Centre and catch the 290 bus in the direction of Staines. From Staines Station take the 290 bus in the direction of Twickenham. Alternatively cabs are available at both stations.